Loss of the web & spider diversification

Loss of the web & spider diversification

Spiders are an incredibly ancient and diverse group of arthropods comprising over 45,000 described species; by all counts they are the largest known animal group that is exclusively predatory. They build many different kinds of webs: orb, sheet, tube, tangle….but many species don’t build a web at all and instead hunt them directly from the ground or on vegetation. The orb web, the spiral wheel-shaped web made by many spider species, has been considered “the crowning achievement of aerial spiders” by evolutionary biologists. This achievement could may have produced an explosion in diversification (i.e. the “speed” at which new spider spcecies emerged through time). Using a snapshot of expressed genes from the messenger RNA in spider species representing a behaviorally diverse subset of spider families, we tested this hypothesis. Losing the aerial orb web in favor of hunting on the ground coincided with a tremendous burst of speciation in spiders. This appears to have happened about the same time as increases in ground dwelling insect diversity during the Cretaceous Terrestrial Revolution (KTR). 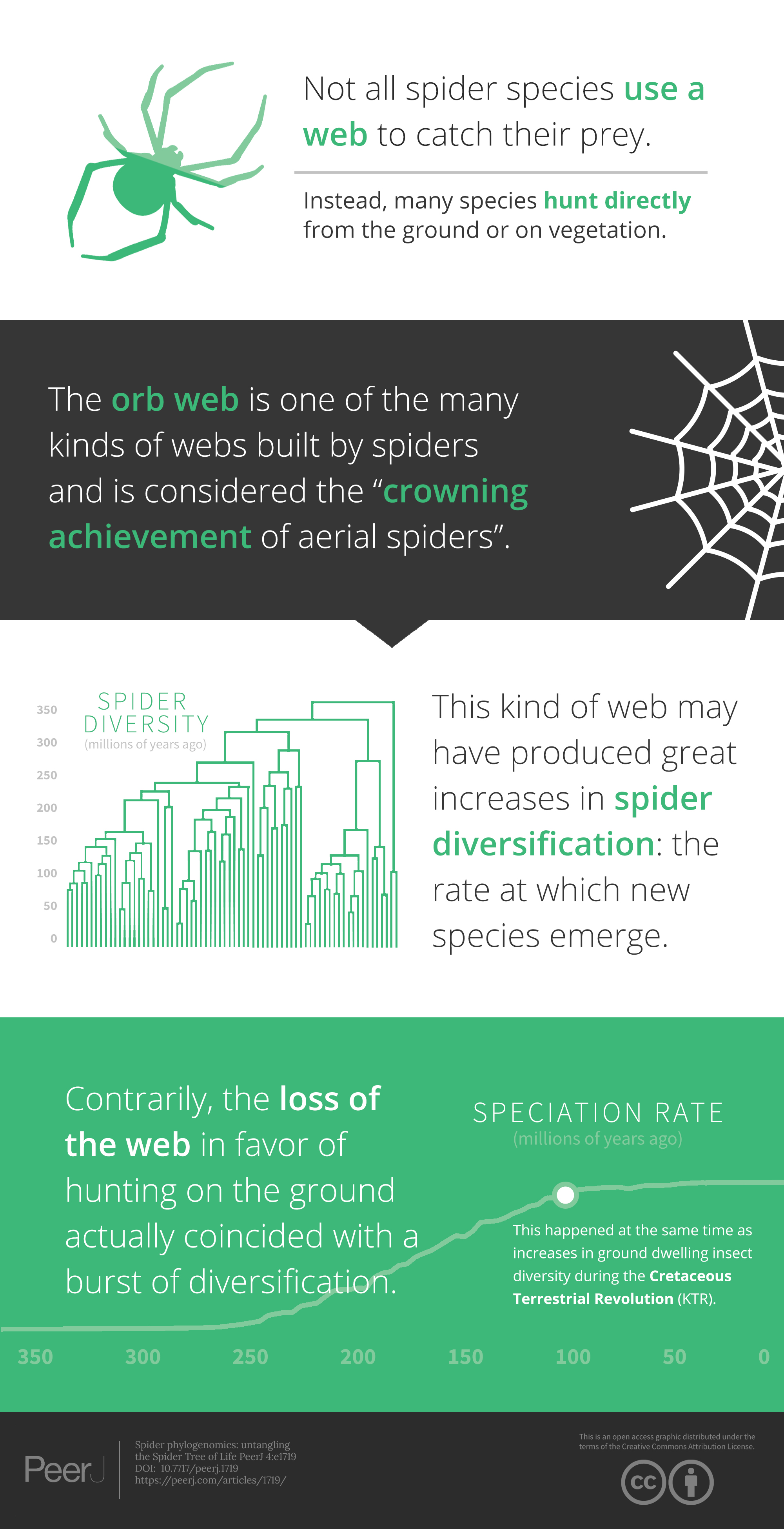 Spiders (Order Araneae) are massively abundant generalist arthropod predators that are found in nearly every ecosystem on the planet and have persisted for over 380 million years. Spiders have long served as evolutionary models for studying complex mating and web spinning behaviors, key innovation and adaptive radiation hypotheses, and have been inspiration for important theories like sexual selection by female choice. Unfortunately, past major attempts to reconstruct spider phylogeny typically employing the “usual suspect” genes have been unable to produce a well-supported phylogenetic framework for the entire order. To further resolve spider evolutionary relationships we have assembled a transcriptome-based data set comprising 70 ingroup spider taxa. Using maximum likelihood and shortcut coalescence-based approaches, we analyze eight data sets, the largest of which contains 3,398 gene regions and 696,652 amino acid sites forming the largest phylogenomic analysis of spider relationships produced to date. Contrary to long held beliefs that the orb web is the crowning achievement of spider evolution, ancestral state reconstructions of web type support a phylogenetically ancient origin of the orb web, and diversification analyses show that the mostly ground-dwelling, web-less RTA clade diversified faster than orb weavers. Consistent with molecular dating estimates we report herein, this may reflect a major increase in biomass of non-flying insects during the Cretaceous Terrestrial Revolution 125–90 million years ago favoring diversification of spiders that feed on cursorial rather than flying prey. Our results also have major implications for our understanding of spider systematics. Phylogenomic analyses corroborate several well-accepted high level groupings: Opisthothele, Mygalomorphae, Atypoidina, Avicularoidea, Theraphosoidina, Araneomorphae, Entelegynae, Araneoidea, the RTA clade, Dionycha and the Lycosoidea. Alternatively, our results challenge the monophyly of Eresoidea, Orbiculariae, and Deinopoidea. The composition of the major paleocribellate and neocribellate clades, the basal divisions of Araneomorphae, appear to be falsified. Traditional Haplogynae is in need of revision, as our findings appear to support the newly conceived concept of Synspermiata. The sister pairing of filistatids with hypochilids implies that some peculiar features of each family may in fact be synapomorphic for the pair. Leptonetids now are seen as a possible sister group to the Entelegynae, illustrating possible intermediates in the evolution of the more complex entelegyne genitalic condition, spinning organs and respiratory organs.