Glacial cycles during the last Ice Age induced changes in the distribution of species. When distribution ranges expand, closely related species might get in contact and interbreed. By documenting higher historical levels of migration of the nuclear genome between species compared to contemporary levels, researchers suggest that current genetic structure resulted form limited dispersal across the isthmus and depression barriers. 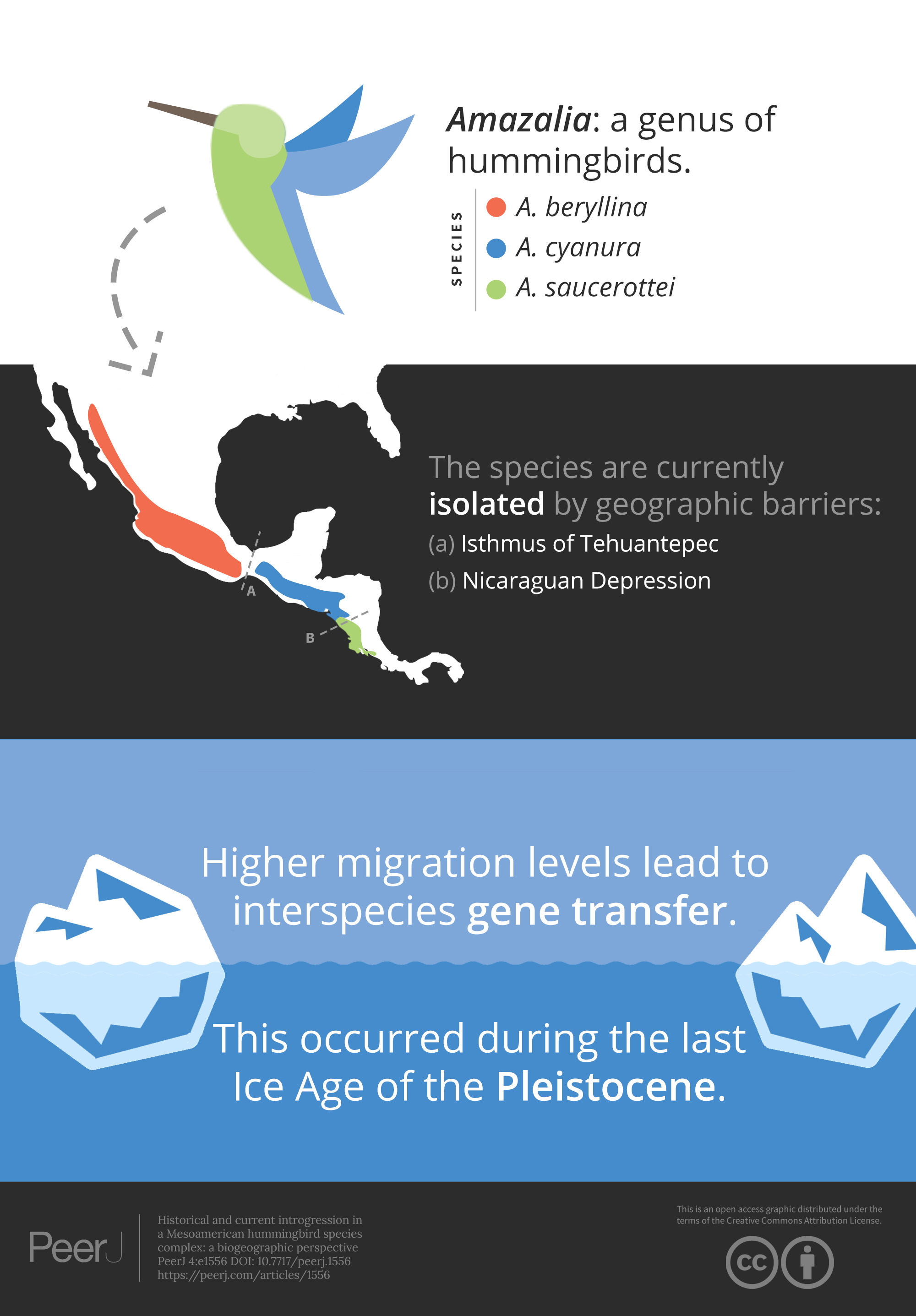 The influence of geologic and Pleistocene glacial cycles might result in morphological and genetic complex scenarios in the biota of the Mesoamerican region. We tested whether berylline, blue-tailed and steely-blue hummingbirds, Amazilia beryllina, Amazilia cyanura and Amazilia saucerottei, show evidence of historical or current introgression as their plumage colour variation might suggest. We also analysed the role of past and present climatic events in promoting genetic introgression and species diversification. We collected mitochondrial DNA (mtDNA) sequence data and microsatellite loci scores for populations throughout the range of the three Amazilia species, as well as morphological and ecological data. Haplotype network, Bayesian phylogenetic and divergence time inference, historical demography, palaeodistribution modelling, and niche divergence tests were used to reconstruct the evolutionary history of this Amaziliaspecies complex. An isolation-with-migration coalescent model and Bayesian assignment analysis were assessed to determine historical introgression and current genetic admixture. mtDNA haplotypes were geographically unstructured, with haplotypes from disparate areas interdispersed on a shallow tree and an unresolved haplotype network. Assignment analysis of the nuclear genome (nuDNA) supported three genetic groups with signs of genetic admixture, corresponding to: (1) A. beryllina populations located west of the Isthmus of Tehuantepec; (2) A. cyanura populations between the Isthmus of Tehuantepec and the Nicaraguan Depression (Nuclear Central America); and (3) A. saucerotteipopulations southeast of the Nicaraguan Depression. Gene flow and divergence time estimates, and demographic and palaeodistribution patterns suggest an evolutionary history of introgression mediated by Quaternary climatic fluctuations. High levels of gene flow were indicated by mtDNA and asymmetrical isolation-with-migration, whereas the microsatellite analyses found evidence for three genetic clusters with distributions corresponding to isolation by the Isthmus of Tehuantepec and the Nicaraguan Depression and signs of admixture. Historical levels of migration between genetically distinct groups estimated using microsatellites were higher than contemporary levels of migration. These results support the scenario of secondary contact and range contact during the glacial periods of the Pleistocene and strongly imply that the high levels of structure currently observed are a consequence of the limited dispersal of these hummingbirds across the isthmus and depression barriers.